I had to create a quick console app in Typescript a few days back to test a few things. This post should help you (and me) setup a typescript console app within a minute.

For the sake of this example, I'm going to create a simple hello-world-ish console app that prints our public IP.

Update the generated package.json as required.

Now add the tsconfig.json file. Here's a basic one:

If you're using VS Code, you may need to restart it for intellisense to work.

We'll need typescript and ts-node to run the app. We could install these globally as well, but I prefer to keep and use local dependencies.

@types/node has typings for node related elements like process.argv.

Create a file called index.ts and add the following code:

We can run our index.ts using:

I'm going to create a script out of the command in package.json to save me some keystrokes. Here's what my package.json looks like:

We can now run the console app using:

If you're familiar with typescript, you should be able to take it from here.

Okay, so let's get to writing the program that displays our public IP. We'll obtain our public IP by hitting the REST API at https://httpbin.org/ip using axios.

Replace the index.ts code with this:

Let's say we need to display the text in cyan using chalk.

Their README expects us to use CommonJS's require() syntax. We'll have to do it the Typescript/ES6 way instead:

You'll need to do this for all libraries that require you to use require() to import it. 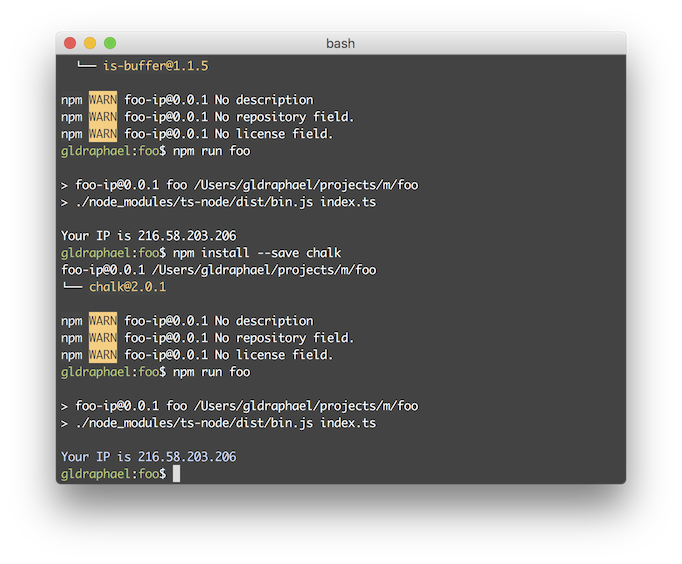 Taking it from here

That's all you need to know to create a typescript console app. The rest is the same usual node thing, you know. If you're trying to create a CLI, Peter Benjamin has a nice blogpost on creating one.